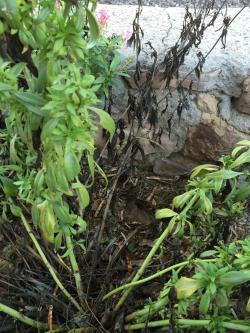 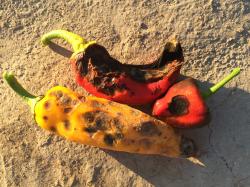 Recent heavy rains may cause plant problems for crop producers and homeowners - Plant diseases caused by microorganisms that require significant amounts of moisture and / or high humidity are usually limited by New Mexico's typically dry climate. However, when environmental conditions favorable for disease development occur, it doesn't take long for these microorganisms to cause problems. Over the past few weeks, heavy rains have hit much of New Mexico and plants are beginning to show Symptoms of Disease Photos. Diseases that are favored by these conditions include foliar diseases and root and crown rots. Microorganisms aren't always the cause of problems following excessive moisture. Roots may become dysfunctional from a lack of oxygen in the soil. Blackening or blighting of leaves, flowers and stems is a common symptom caused by many different organisms that cause 'foliar' diseases. Some of the organisms which cause these problems are true pathogens, such as powdery mildews, fungal leaf spots, and bacterial leaf spots. In addition to true plant pathogens, some organisms that are typically saprophytes (organisms that are usually not harmful to plants) can become 'weakly pathogenic' when environment conditions are highly favorable for their growth and activity. Plants growing close together or in locations with poor air circulation are especially susceptible to attack by microorganisms. Plants weakened by other environmental stress or other pests are also more susceptible. Plants which have been experiencing prolonged drought are especially vulnerable to root rot when the roots are exposed to excessive amounts of water. The long term damage caused by foliar diseases depends on the situation. Annual plants may die or become unsightly earlier than expected. Perennial plants that are going to shed leaves later in the fall will likely see little permanent damage to the plant. Plants with root or vascular problems may develop stem or branch dieback or die. Plants that were stressed due to other conditions before the heavy rains may succumb to the cumulative stresses. Contact: Natalie Goldberg

How to Protect Grapes from Birds

At this stage in the growing season where birds are starting to feed on the ripening grapes it is time to protect the crop. Birds tend to start feeding on grapes at about 14.5% brix (sugar measurement). Wines, which are produced by bird damaged Grapes also tend to, have higher acidic acid content. Bird netting is a very effective option for bird control. There are a number of options when choosing nets, material, net dimensions and mesh shape. Shape of the mesh is not a priority as long as it is small enough to keep birds out. However dimensions of the net is crucial, as it is necessary for the net to be large enough to cover the area of the grape vines, grapes and leaves. Material is another important aspect. To keep cost low extruded plastic material can be selected. This type of material is less expensive but also not as durable as woven netting. Woven netting is more durable; it can be used up to five or six times that distributes the initial investment cost. Tightly woven insect netting (.12-inch mesh size) represents another option for bird protection as well as insect protection for the grape crop. These nets are expensive in comparison to the extruded and woven material with .75-inch mesh size. Contact: Bernd Maier 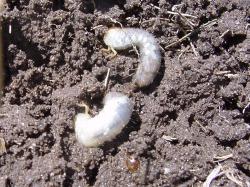 Over the last 2 weeks, Specialist's at New Mexico State University have received several calls and emails about severe and extensive injuries in lawns (Fig. 1). After further examination and some digging the owners found what are called 'white grubs' (Fig. 2). Severe grub damage appears as large, irregularly shaped brown and dying turf that detaches from the soil without effort. The turf peels away like a carpet being rolled up, because most of the roots are gone. The damage is caused by the larval stages (grubs) of various scarab beetles including May or June beetles and European chafers, Japanese beetles or northern masked chafers. Such grubs not only feed on the roots of turfgrasses but also on those of corn, beans, peas and other vegetables. Full-grown third-instar grubs average slightly over one inch in length. All will be multi-segmented with three pairs of easily visible, jointed legs on the thorax, white or off-white bodies and brown, button-like head capsules with chewing jaws. When exposed by digging, grubs usually roll onto their sides in a C-shape. Adult beetles emerge from infested soil in summer, fly extensively, mostly at night, and mate. Females find suitable turf, dig down over an inch into the root zone and lay their eggs during the summer. As soon as the grubs hatch, they start feeding on the roots until cold weather drives them deeper into the soil where they overwinter. With warm weather and increasing soil temperatures in the spring, the grubs move up from the lower soil regions and resume feeding near the surface until they become mature and pupate. The older these grubs get, the more difficult it becomes to kill. Curative applications are made best when the grubs are small (early fall). If the damage is well advanced (left photo) and grubs are one inch or larger in size, there is little to nothing that can be done. Mid-to end of May is usually when the damage is most pronounced. At this point, an insecticide application is too late and should have been made earlier in the season when the grubs were younger and easier to kill. Common curative controls against adult grubs include carbaryl, which is not consistently effective, imidacloprid, and trichlorfon. Some products that include trichlorfon have to be applied by a licensed professional and kill, at best, 50% of the mature grubs. Other white grub control products with different active ingredients are also labeled for use by licensed professional applicators. These insecticides Do Not protect the lawn from the next generation of grubs. As always, Read and Follow Label Instructions when you apply pesticides. At this late juncture, we suggest that you wait until the white grubs pupate and the adults emerge from pupae in early summer. Treat the new generation of white grubs with appropriately labeled insecticides in late July-August. At that time you should start rebuilding your lawn through reseeding or resodding. Turf maintenance requires on-going, year 'round vigilance with timely and appropriate responses to problems. Contact: Bernd Leinauer or Carol Sutherland